And we thought the seawall project in Usuiso was mammoth.  And it is.  $106 million is a lot of rolled quarters.  But compared to Rikuzen-takata, that's exactly what it is.  It's sofa change.  Steve estimated the dirt required to raise the downtown by 12 meters (38-40 feet) would cost about a billion dollars, assuming downtown was, what? a square mile?  Less?

When we arrived Wednesday evening, our planned tour of some key sites mostly got rained out.  But we did stop at a service area, unusual to our eyes in that it featured grandstand-style seating, looking out over the...I wasn't sure.  Here it is in the rain: 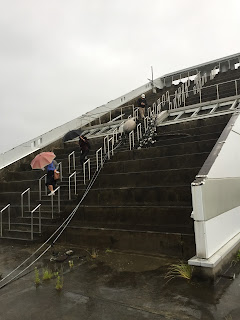 It's about a 4-story concrete structure, and way up on the top, even above those slit windows, on the tiny roof of this thing, two guys survived the tsunami.  Because the water wasn't QUITE that high.  It's one of the scarier things I can think of, suddenly being a mile "offshore" in the middle of the ocean, when the only thing you know you can do on your own behalf is 'stay put.'  And that might not be enough, either.

The other things on our tour would've been the Miracle Tree, the one surviving pine of an original 70,000.  You can see the new seawall in the background: 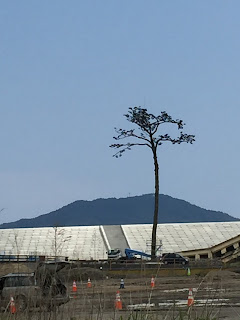 And we also would've seen the middle school where the teacher decided, given the duration of the earthquake, to lead students to higher ground beyond the designated meeting place.  The designated location was, in fact, overwhelmed, but all the students were safe somewhere else, thanks to someone not following the rules.  Mmm.

So, the leading advice from folks on the coast:  run like hell when the ground stops shaking.  Even after the new seawall, the new tidal gate, the newly-lifted downtown, that's still the takeaway: go outside and git.

Because around here, that's apparently easier said than done.  It didn't help that there had been a handful of false alarms, including just two days earlier.  It sounds like many people blew it off.  I wonder if the Oregon coast would have an equal but opposite reaction, of full-blown panicked dithering, that would amount to essentially the same result.  I'd like to think not, but with mid-summer tourists around?

Bxl Mxl
I hope this blog will help me focus a little more on where I am and what I'm doing (hmmph). I also hope folks find it entertaining. Is there anything else one needs to know about a blog?